A successful season for Coleg y Cymoedd ended in disappointment, going down to defeat against Coleg Gwent in the Schools & Colleges Final at Sardis Road on Tuesday evening 14th January. 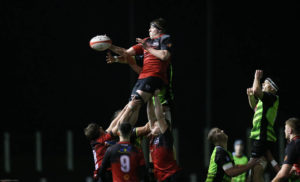 Cymoedd had finished the league campaign in pole position, cementing their status with two impressive victories into the new year, away to Coleg Sir Gar by 15pts to 33 then away to Coleg Llandrillo by 17pts to 29.

Coleg Gwent earned the right to compete in the final decider by finishing second in the table, just three points adrift of Cymoedd.

Following a close fought encounter it was Coleg Gwent who were crowned as WRU Schools & Colleges champions, edging a 8pts to 11 victory with a late long range penalty. Cymoedd were leading at the interval by 8pts to 3 courtesy of a Tyler Morris penalty and a try scored by winger Cavan Davies.

The defeat prevented Coleg y Cymoedd from claiming the title for the third successive season.