Cymoedd on a winning run

Coleg y Cymoedd continued their impressive winning run in the WRU Schools and Colleges League with a 24pts to 12 home win over Coleg Gwent at Sardis Road on Wednesday 23d October. 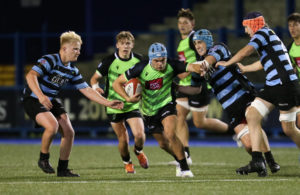 Cymoedd now sit second placed in the table but with a game in hand over Cardiff & the Vale, a team that they have already beaten, by 8pts to 15 in the first game of the league season.

Other victories have come by 45pts to 5 over Neath Port Talbot, by 71pts to 15 at home to Coleg Sir Benfro (Pembs) and by 7pts to 28 at Llandovery College.

Reigning champions Coleg y Cymoedd are next due to face Gower College at Sardis Road on Wednesday 6th November.