Pontypridd RFC are delighted to announce the signing of Jordan Howells from Bargoed RFC.

Jordan’s international honours include Wales Rugby League U16’s, U18’s and ‘A’ team along with The Crawshays representative side.

On signing for the club, Jordan said: “When the offer came from the coaches at Pontypridd it was an opportunity I couldn’t turn down. I’ve always enjoyed playing against the club when I’ve been with other teams in the premiership and now I’m looking forward to playing in the Pontypridd jersey and getting to know everyone around the club.”

Ponty Team Manager Dan Godfrey said: “Jordan is a hard hitting centre who has lots of experience and has always caused us problems when we have played against him.” 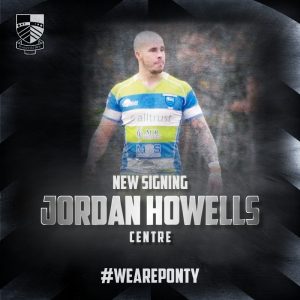