Abercwmboi product Dafydd Lockyer first linked up with Ponty from the Warriors’ regional academy and broke into the senior team at the turn of the semi-pro era in 2003, being capped by Wales at Youth and Schools levels, and later at under 21 level.

Having initially played on the wing, Lockyer soon made the inside centre berth his own and became recognised as a standout performer at Premiership level. A move to Neath in 2007 was interrupted by injuries and Lockyer returned to Pontypridd two years later. His career was re-ignited, nominated as Premiership Player of the Year in 2011 and 2013 and stepping up to the role of Ponty skipper in 2014. 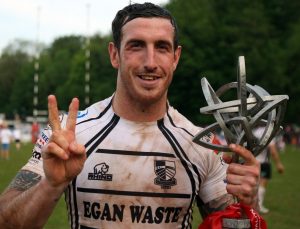 It was no coincidence that Lockyer’s prime time as a Ponty player and captain coincided with a golden era for the club, winning the Welsh Cup four times, claiming four consecutive league championships, winning the WRU Challenge Cup and crowned as National Sevens champions. Under his leadership Ponty also engaged in some epic battles against fully professional opposition in the British & Irish Cup.

His status was further enhanced by a call-up to the ranks of the Barbarians, being voted as the Supporters’ Player of the Year in 2015 and becoming one of only a handful of players in the semi-pro era to be ‘grogged’. Lockyer was awarded a testimonial season by his club in 2018.

A towering presence in the Pontypridd midfield, an enforcer and a creative influencer, Dafydd Lockyer had been elevated to the ranks of the club greats before his retirement in 2021 at the age of 36.