On Easter Sunday, club historian Alun Granfield looks back at the tradition of the Pontypridd RFC Cornish tour…

In the golden years between the start of the European competitions in 1995 and the end of professional club rugby in Wales in 2003, Pontypridd teams, followed by hoards of supporters, got used to travelling to distant places to play their rugby.

We had always played English sides, but now we had regular fixtures with Scottish and Irish teams, and trips to France and Italy. The semi-professional era still gave us some trips to Scotland and Ireland in the British and Irish Cup, but our travels gradually became less and less.

Even these more restricted journeys would have seemed amazing to the players who took the field for Pontypridd in the years after the war. However, in 1951 a tradition began which was to continue for many years – the Cornish tour. In 1953 it became an early season trip, usually carried out in September. However, the first two Cornish tours took place at Easter time, in 1951 and 1952.

A report of the second tour appeared in the Pontypridd Observer on 3rd May 1952, written by Harry Thomas, the Pontypridd full-back. It is worth reproducing in some detail to get an idea of what rugby was about in those days:

The Pontypridd rugby team and a group of officials left Pontypridd on April 25 for their tour of Cornwall. Chepstow was the first stopping place and after a nice cup of tea, an inspection of the castle was made. Lunch was enjoyed at Bridgewater, and Trevor Watton was picked up en route at St Luke’s College, Exeter. A minor stop was made at 6 p.m. for light refreshments, and the party arrived at Penzance at 8 p.m.

During the evening a visit was made to the Mounts Bay Hotel, where the singing and refreshments were enjoyed by all. The headquarters of the party during the tour were at the Marine and Mount Prospect hotels. On Saturday morning the team limbered up by playing a hard game of darts and clock golf! The first match was against Penzance…

After the match the Penzance R.F.C. extended their hospitality to us at the Union Hotel, and we were entertained royally at their clubroom. At 10.30 p.m. the party attended a dance which had been arranged in their honour. After a restful night as guests of the Penzance R.F.C., a visit was made to Land’s End, and under the able guidance of Buster Brown, a tour was made of the district. On Monday the party visited Falmouth, where they were met by the secretary.

After the match the Falmouth R.F.C. supporters provided a real Cornish tea complete with Cornish pasties. After climbing the 112 steps of Jacob’s ladder, the party rested awhile in the Summer Hill Hotel. Again, the singing was a notable feature of the evening, and the landlady was so pleased with Pontypridd R.F.C. that she gave a trophy for the clubroom at the Greyhound – a monk. The party returned to Penzance at 11.30 and Buster Brown was elected chairman for the evening, and everyone had to sing a solo in turn. The solos of Dai Rogers and Mr O’Neil will long be remembered.

On Tuesday the touring party left Penzance at 8.45 a.m. and stopped at Exeter for lunch and Gloucester for tea. The bus arrived at Cardiff at 8.15 p.m., and some of the players were dropped off en route up the old A470. The majority went on to Pontypridd and disembarked at the Post Office – and no doubt immediately popped into the Greyhound for a last drink before going home? 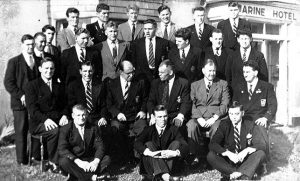 The photograph of a tour party outside the Marine Hotel was taken a few years later, in 1956, but Dai Rogers is still there, standing on the left in the second row at the back. Buster Brown was a hooker who played many games for Ponty in the early 50s, and Josh O’Neil was a long serving committee man and supporter of the club. Josh had been the club Chairman in 1911, so must have been clocking on a bit in 1952. A great character, with a powerful voice that he often used to good effect in matches at Ynysyngharad Park, offering his advice to players and especially to referees.