Pontypridd travel to face Swansea for a ‘Bank Holiday Special’ Premiership tie on Good Friday 30th March. The match at the St Helens ground kicks off at 2:30pm. 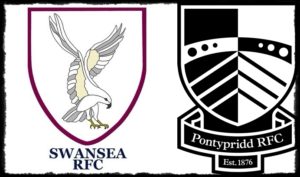 The two sides have not met since November 2016, when Ponty won at home by 29pts to 13, completing a season’s double over the All Whites.

In the current Premiership rankings Pontypridd lie in sixth position with Swansea back in thirteenth. Both sides suffered disappointing losses on their previous outings, Ponty by 10pts to 30 at home to Llandovery and Swansea by 43pts to 3 away to Ebbw Vale.

The Friday afternoon fixture has caused selection problems for Ponty due to player unavailability. Drafted in on permit from Skewen RFC is winger Matthew Billett, with Cameron Lewis returning from Wales Sevens duties on the opposite wing and promising Coleg y Cymoedd youngster George Thomas covering on the bench.

The Pontypridd team selected to face Swansea is as follows: