Pontypridd Youth enjoyed a successful 2017-18 campaign with the ultimate glory of being crowned as National Champions. 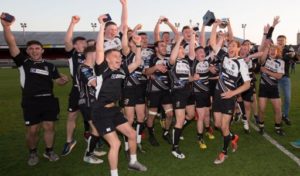 Having finished runners-up in the Blues A league, nine points adrift of leaders Rumney Youth but having played two fewer games, Ponty were however given a pass to the regional play-offs as the Cardiff based club could not commit to the additional fixtures.

In the National Cup Ponty exited the competition at the quarter final stage, losing to Rumney Youth by 21pts to 11, having seen off Brecon and Llandovery in the previous rounds.

In the regional play-offs Pontypridd secured victories over Newbridge and Nant Conwy before meeting Bridgend Athletic in the National Final at Rodney Parade on Saturday evening 19th May. It was Ponty who took the honours by 29pts to 12 to be crowned as champions.

That victory was a fitting send off for nine players leaving the youth at the end of the season – Dafydd Smith, Rhodri Smith, Josh Ashcroft, Will Pugh, Keillan Mahoney, Ioan Evans, Carl Blacker, Ross Woodward and Jordan Thomas. The coaches and management wish to thank them for three years of outstanding effort and wish them all the best for the future.

Joint top try scorers for Pontypridd Youth, with 11 each, were Dafydd Smith and Dafydd Lloyd. whilst top points scorer with 135 was Bailey Roberts.