It will be all change for Pontypridd in the centre positions as the senior squad is finalised for the coming season.

The summer departure of influential midfielders Dafydd Lockyer, Gary Williams and Alex Knott had left the club short in such a vital department, but a robust recruitment drive has made good those losses.

A significant addition at centre is newly appointed club captain Morgan Sieniawski, who has returned from Wales Sevens duties and decided to make a shift from his previous role as a flanker. His experience at international level, his pace and power, are attributes that bode well for such a move. 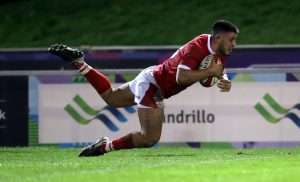 Sieniawski will be joined in midfield by Bradley Roderick (pictured above) who has represented the Ospreys Academy and been capped by Wales at Youth and under 20 levels.

Another newcomer is Ceri Morris, originally from Carmarthen, who now joins from Pontypool, having progressed through the Scarlets Academy and gained Premiership experience with Llandovery.

Three youngsters who have linked up with Pontypridd are Josh Male from Glamorgan Wanderers, who came through the Cardiff regional age grade system, as did Aberdare product Garyn Payne who’s 6ft 3in frame will provide a physical presence in midfield, and Callum Williams who was nurtured by Senghenydd Youth before breaking into the senior ranks at Bedwas in 2020.