The Indigo Group Premiership match between Pontypridd and Swansea on Saturday 21st January 2023 has been postponed.

The conditions at Sardis Road have been closely monitored over the last few days, the following is a description of issues at the ground –

The pitch was inspected this afternoon at 2:00pm (which is the approximate time of kick off scheduled for Saturday). There were several areas, at the north or Pwllgwaun end of the ground, that were covered with solid, hard ice as a consequence of undergoing several cycles of superficial freeze-thawing over the last few days. Furthermore, there is an area in front of the Grandstand that receives no sunlight at this time of the year and it is still frozen (at the time of inspection). As Friday night’s temperature is forecast to decrease to -1 degrees Celsius and the air temperature, for Pontypridd, is forecast to be at its maximum of three degrees Celsius at three o’clock tomorrow afternoon (Met. Office forecast for Pontypridd), there is no prospect of any change (on the evidence of the last three days).

As a result Pontypridd RFC has little other option than to postpone tomorrow’s match. We will announce a rescheduled date in due course. 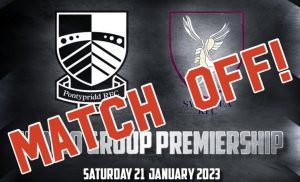