Pontypridd host Llandovery in a Premiership tie on Saturday 24th March, the match kicking off at 5:15pm screened live on S4C. 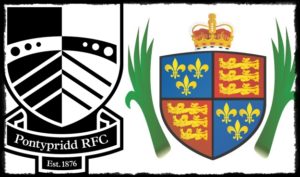 Having snatched bonus point wins from the jaws of defeat in their last two games, at home to Bridgend and away to Neath, Ponty currently lie fourth in the table, five places above Llandovery. Those rankings are however deceptive as the Drovers have only played four of which they have won three. They also come into this fixture buoyed by a hard fought 13pts to 14 National Cup quarter final victory at Cross Keys on the previous Wednesday evening.

The last time that the two teams met was back in February 2017 when Ponty claimed a 42pts to 24 home win.

Going into the Llandovery clash Pontypridd welcome back centre Gary Williams from injury, allowing Lloyd Rowlands to revert to full back. Blues prop Corey Domachowski also returns to club duties. Hooker Huw Dowden is sidelined with a calf strain picked up in the Neath match, with Will Haly from USW drafted in as cover on the bench.

The Pontypridd team selected to face Llandovery is as follows: