Pontypridd host Ebbw Vale in a Premiership East tie at Sardis Road on Saturday 4th November, the match kicking off at 2:30pm. 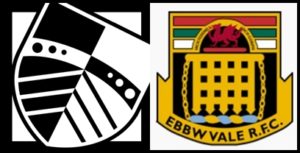 On a fine run of form, Ponty are currently second placed in the table, equal on points with leaders Bedwas and with an identical record of six wins from eight games played, trailing only on points difference.

A 15pts to 37 away bonus point win against Bedwas last time out was proof of Ponty’s current resurgence.

Their next opponents Ebbw Vale lie sixth in the table with three wins and five defeats to their name, one of those in the reverse fixture at Eugene Cross Park on 1st September when Ponty came away with a 6pts to 17 victory.

With a number of academy players on Blues duty and with outside half Ceri Sweeney away in a veterans tournament in Dubai, Pontypridd dig deep into their resources for the clash against the Steelmen of Gwent.

Shay Smallman is given a start at lock, with Harvey Connolly and Joseph Williams on the bench. Outside half Jordan Rees from Mountain Ash and hooker Grant Jones and flanker Sion Edwards from Porth are drafted in as cover.

The Pontypridd team named to face Ebbw Vale is as follows: