At the second time of asking Pontypridd Youth hosted Brecon on Saturday 28th October in a National Youth Cup tie that was abandoned following an unfortunate injury to the referee the previous week. 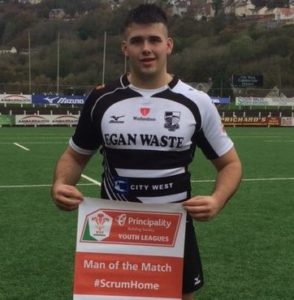 Both sides were eager to set out their stall early on playing with a pace, intensity and precision that was missing in their previous encounter. Pontypridd showed a clinical approach to finish off try scoring opportunities and soon found themselves 12pts up. Brecon came back strongly but for all their effort were only able to register a penalty kick on the score-board.

Both teams played entertaining and dynamic rugby going through the phases and with play moving from end to end. It was a determined defensive effort by Ponty when required and their clinical finishing near their opponents’ line that allowed them to extend their lead to 24pts to 3 at the break.

The second half saw Brecon come back strongly in the opening exchanges but again failing to reap the reward that their efforts deserved. The home team responded in style and finished off their chances with aplomb to further extend their lead to 34pts to 3.

In the closing quarter of the game Brecon struck back with a well deserved try but it was Ponty that had the final word and touchdown to register an emphatic winning score of 39pts to 8.

Man of the Match (pictured) was flanker Ieuan Davies.