Swansea were quickly out of the blocks, scrum half Tom Ham playing a penalty advantage to break, centre Callum Carson then slicing through to score, his try converted by James Davies. Ponty suffered another early blow as influential flanker Rhys Shellard departed injured. The home pack were strong in the set pieces, winning penalty awards and pulled further ahead following a wide attack as full back Josh Thomas went over in the corner. 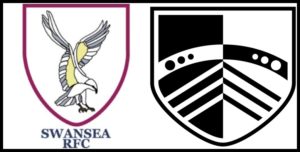 Shaken but not stirred Ponty gradually forged their way back into contention, benefitting from a line-out drive as hooker Rhydian Jenkins claimed a touchdown, Ben Jones adding the conversion. The scores were coming thick and fast, James Davies stroking over a penalty for the Whites but Ponty responding with concerted pressure, no8 Kristian Parker powering over from close range with Jones again converting.

The contest was picking up in tempo with attacks and counter attacks, Swansea edging ahead through a Davies penalty, but Ponty’s ploy of kicking for touch rather than goal rewarded from a line-out drive with a penalty try awarded, home prop Tom Sloane shown yellow for infringing. Following a lengthy injury delay with Swansea full back Thomas stretchered off, a long range penalty kicked by Ben Jones put Ponty into a 18pts to 24 interval lead.

A third James Davies penalty opened the second half scoring, the game picking up pace, frenetic and close fought, Swansea again a man down as winger Max Nagy was sin binned for a high tackle. The line-out drive was a favoured ploy for Ponty, applying pressure but centre Dafydd Lockyer held up over the whitewash. Winger Mason Grady then set off on a surging run, the visitors varying their play between forward drives and wide attacks, but unable to capitalise on their man advantage.

Ponty continued to elect to kick for touch rather than goal, Grady going close from an opportunist chip and chase but the ball going dead, a significant amount of pressure coming to nothing. Swansea forged their way back into contention into the final ten minutes, setting up a tense finale to the game. Ponty attempted to keep the ball tight to count down the clock but found themselves a man down as replacement James Murphy was yellow carded. High drama followed into injury time as Swansea pressed and finally found a way through, centre Callum Carson barging over for a match winning try, the final score-line of 26pts to 24 in the home team’s favour.