The House of Pain was turned into the House of Rain on Saturday afternoon as Pontypridd suffered the narrowest of defeats, by 15pts to 16 against Aberavon in a near constant downpour. 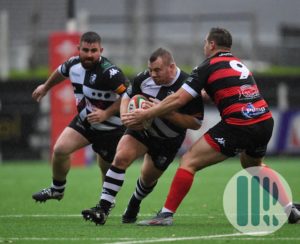 Trailing by 8pts to 10 at the interval, Ponty were given a glimmer of hope into the final ten minutes of a dour contest, briefly taking the lead but then falling behind to a last ditch Aberavon penalty, having outscored their opponents by two tries to one.
The defeat in the rain had dampened the spirits of the Ponty squad. Speaking after the final whistle, club captain Dafydd Lockyer gave his opinion on the match.
“We’re gutted to have lost” said Lockyer. “We put ourselves right back into the game late on but couldn’t hold out for the win.
“Aberavon dominated the set pieces and it was hard for us to get our hands on the ball for long periods. We worked hard in difficult conditions but we fell short. Aberavon are a top forward unit, but we just have to concentrate on our own game and prepare for the trip to Newport in two weeks time.”
Pontypridd Director of Rugby Justin Burnell was also frustrated by the way the game went.
“There were disappointing aspects from our point of view” said Burnell. “We need to look at our game management, where we put ourselves into a winning position but then conceded a late score to lose, as we did against Cardiff earlier in the season.
“We also need greater consistency from the officials from one game to the next. We get decisions going against us, we work on that aspect of our game but then get penalised in different ways. I can’t see the consistency, and the penalty count against us was critical today.
“We now have time off to regroup before going to Newport, which will be another tough prospect.”