The Pontypridd RFC doctors and physios have been kept busy over the festive period, tending to a growing list of casualties amongst the squad. 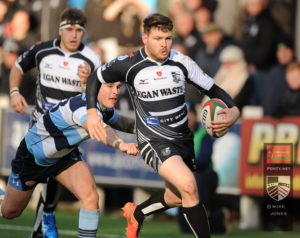 Thankfully the injuries are mostly of a minor nature and with the longer term absentees also making good recovery.

Full back Joseph Williams has his arm in a cast having suffered a fractured thumb with a predicted month out of action. Lock Shay Smallman has a wrist strain which will require further scans to determine its seriousness.

A number of players have been out with niggles and tweaked muscles, all hoping to be there or there about when it comes to selection for Ponty’s next game, away to Cross Keys in the cup. Full back Gary Williams (hamstring – pictured above), props Keelan Marney and Jon Elley (foot and back respectively), hooker Huw Dowden (achilles tendon) and back rowers Rhys Shellard and Morgan Sieniawski (neck and ankle) have all benefitted from a rest period and will be assessed towards the end of the week.

Another expected to be given the all clear is no8 Hemi Barnes who pulled out of last weekend’s clash with Bedwas suffering from a virus.

The club’s long term casualties are all reported to be making good progress. Full back Lloyd Rowlands and prop Will Davies-King are recovering from ankle ligament damage and could be back in action within a month to six weeks. Flanker Jake Thomas is nearing the end of his rehabilitation from a knee operation and is expected to turn out soon for his local club Ynysybwl to gain match fitness.