Next up for Pontypridd is the visit of Ebbw Vale this Saturday 10th December – The Indigo Group Premiership match at Sardis Road kicks off at 2:30pm.

Last season the two clubs met three times, home advantage proving key on each occasion. The 2021-22 season started with the Indigo Group Premiership Cup competition and in September 2021 the Steelmen won 16-6 at Eugene Cross Park. Ponty avenged that defeat a couple of months later in the November at Sardis Road, a brace of tries from Dale Stuckey contributing to a 31-3 bonus-point win.

Then on the final day of the 2021-22 Premiership campaign in April 2022, Pontypridd edged an attritional affair 14-3 – ‘penalty-try’ getting a brace of tries on the day ensuring Ponty finished the season on a high at Sardis Road.

Pontypridd will be buoyed by their excellent win away at Aberavon in the Welsh Cup last Saturday and will be aiming to take confidence into this week’s match after two agonising, last-gasp defeats in our last two league outings at Sardis Road. Conversely, Ebbw are coming into this weekend’s match on the back of three excellent consecutive wins in the league – they beat the Quins comprehensively at home in their last outing and prior to that won away at Aberavon and at home against Swansea respectively.

Matches between the Valley Commandos and the Steelmen are generally close-fought affairs and this week promises to be no different.

Tickets – Admission on the day will be £12 full, £10 concession access-all-areas and under 16’s free if accompanied by a paying adult. You can purchase tickets on the day or to save time can use our new online e-Ticket system, link – e-Tickets – The club has increased the range of tickets now available to cover small groups (2 people) and large groups (4 people).  We are also pleased to have introduced a family ticket for our Youth and Mini & Junior sections.

Supporter access is via the clubhouse end of the ground only as the Pwllgwaun end remains closed.

The Sardis Road Clubhouse will be open from midday and we’ll be showing selected live Champions Cup rugby throughout the afternoon and into the evening.

We look forward to welcoming supporters from both clubs to The House Of Pain this Saturday. 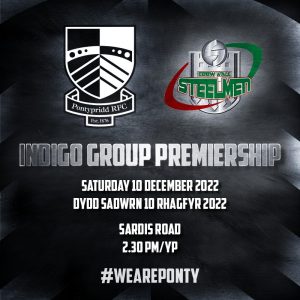