Pontypridd kick-off their Indigo Group Premiership campaign at home against arch-rivals and champions Cardiff when the 2022-23 season kicks-off on 3rd September 2022.

The two teams will then play the return fixture in the Welsh capital on Boxing Day as one of five festive derby clashes in a season that will see the 12 teams revert back to home and away matches.

Another change, reverting back to the 2016-17 season, sees the return of a play-off system to determine the champions after the 22 game regular season. A decision on potential relegation and promotion form the Championship has yet to be made.

“Last season went right down to the wire and the 2022-23 campaign looks like being even more exciting with the return of a play-off system to determine the champions,” said WRU Community Rugby director, Geraint John.

“There was an appetite from the clubs, players, fans and broadcasters to see the play-offs return and there will be prize money for the two finalists as well as a home venue advantage for the top ranked team. The semi-finals will also be played at club grounds.”

“The viewing figures for the Thursday night live and weekend matches grew over the course of the season and there was a general feel-good factor about the Premiership as Newport won the Cup and Cardiff took the league title.”

“Even more importantly, the tournament as a whole provided invaluable in giving the young, aspiring professionals at many of the regions a proper baptism in senior rugby. Mason Grady and Cameron Winnett played for both Cardiff RFC and the regional side last season before playing in the Wales U20 campaigns.”

“The U20 outside half Dan Edwards had a full season at Aberavon, as did Ben Williams, while Iestyn Hopkins got game time at Swansea. Many other of the current Wales U20 squad in Italy were also involved in Premiership cup and league matches and there is a huge desire across the board to continue to raise standards.”

The new season will kick-off with a round of derby clashes. The champions, Cardiff head to Sardis Road to face Pontypridd, while cup winners Newport host Ebbw Vale. Carmarthen Quins will welcome Llandovery, Llanelli host Swansea in what will be the Whites’ 150th anniversary season and Aberavon will be seeking revenge over Bridgend at the Talbot Athletic Ground after losing to them in April.

“There is no doubt Sardis Road is going to be a tough place to kick-off the defence of our title, but at least we are back home for the return fixture on Boxing Day,” said Cardiff head coach, Steve Law.

“Standards are rising, the quality of the matches is improving and the tournament is becoming increasingly competitive. The WRU is investing more money into the Premiership and the media profile is increasing,” added John.

“We continue to examine ways to make the Premiership an even better gateway to full-time professional rugby for the top young talent in Wales and will remain in constant dialogue with the clubs to find the best way to keep the tournament on an upward curve.”

Pontypridd RFC’s 2022/23 fixture list is below, please note that due to TV broadcasting fixtures are subject to change. 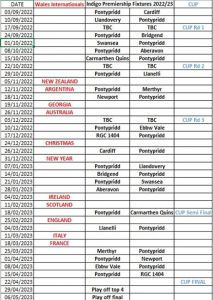