Hailing from Aberdare, Thomas Young followed in his father Dai’s footsteps in forging a career as a senior rugby player.

Graduating through the Blues regional age grade and academy system, Young converted from his original position of full back to be a dynamic openside flanker. 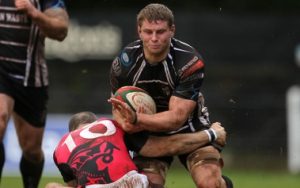 International honours ensued with Wales at under 18 and under 20 level.

In 2010 Young was drafted from the Academy to the senior Blues squad.

An allocation to Pontypridd followed in the summer of 2013, representing the club as a senior regional player. In January 2014 Thomas Young moved on to join English Premiership side Gloucester.