A product of Ysgol Gyfun Llanhari, Gareth Wyatt graduated out of the Pontypridd Youth set up alongside fellow future internationals Kevin Morgan and Martyn Williams.

Having starred for Wales Youth in a Grand Slam season, and in a FIRA World Cup campaign, Gareth was introduced with caution to the Ponty senior squad, playing only five games in 1995, but making a significant impact as a speedy, side-stepping winger.

The following year saw Gareth’s versatility, along with injury problems to a small Ponty squad, forcing him to play much of his rugby at outside half or full back, and winning a senior cap for Wales, against Tonga in 1997, wearing the no 15 shirt. 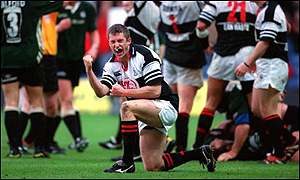 Ponty’s recruitment drive in the summer of 1999 allowed Gareth to concentrate fully again on the winger’s role, making his mark out wide, and was followed by further international honours with the Wales A and Sevens teams.

Gareth’s status as a try poacher of the highest quality was underlined with some stunning scores in Ponty’s bid for European glory in the 2002 season.

The advent of regional rugby saw Gareth moving on to represent the Celtic Warriors and then the Gwent Dragons, before joining Newport in the 2008/09 season.

Gareth Wyatt returned to Pontypridd for the 2010/11 season, a senior member of the squad but continuing to impress as a winger, full back and occasionally as an outside half. In 2012 he progressed to become a player-coach, assisting Paul John in nurturing the backs at the club.

When Gareth Wyatt eventually called time on a glittering playing career at the end of the 2013 – 2014 campaign, he stepped up to a role as assistant backs coach with Pontypridd having made 293 appearances for the club, scoring 112 tries and amassing 680pts.