Hailing from the village of Glyncoch, Stuart Williams represented his local club at Youth level before moving on to Pontypridd at the same age group, and gaining representative honours with the Mid Districts. 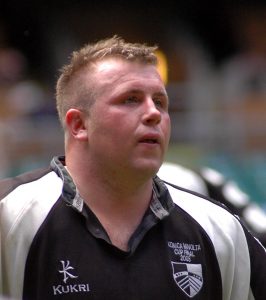 Graduating through the Pontypridd under 21s Academy, Stuart then joined up with Gwent Valleys side Rhymney at senior level in the year 2000, spending the next two seasons playing for them. Following a spell with Cilfynydd, during which time he played on permit for Pontypridd in their 2003 premiership campaign, Stuart became a regular member of the Ponty senior squad for the following winter’s campaign.

Maturing into a real physical presence in the Ponty front row, Stuart soon established himself as the number one choice for the loose head berth, offering a hard edge to the club’s forward efforts in both set piece and open play.

Stuart’s life was tragically cut short in its prime on 21st October 2013 – his memory will long be cherished by all at Pontypridd RFC.