Blackwood-born Owen Williams progressed from junior to senior level with his local club, impressing with his pace and his towering frame and giving a standout performance in a Welsh Cup tie against Pontypridd in 2008. Owen was drafted on permit to Ponty for the rest of the campaign, including a start in the Konica Minolta Cup Final. During the close season, Owen was given a chance to sign for Pontypridd permanently, and to make his mark in the Premiership. 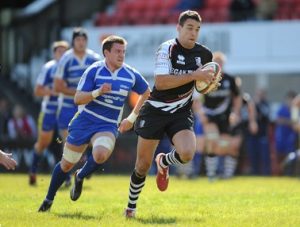 In 2011 he was given the opportunity to stake a claim with the Wales Sevens Development Team, captaining the team during their FIRA-AER tournament in Spain. At the conclusion of a fine season for club and player alike, Owen was nominated as Pontypridd RFC Player of the Year.

Owen’s tenacity at the Sevens game brought about a call-up to the senior Sevens squad in late 2011, and Owen was instrumental in securing the Plate at the IRB Sevens Series in South Africa, scoring a superb try.

Owen Williams moved on from Pontypridd in the summer of 2014, having made 118 appearances for the club and scoring 48 tries.