Local boy Martyn Williams came up through the ranks of Pontypridd Youth, to make his senior debut for the club in 1994.

Despite stiff opposition for the openside flanker’s berth from seasoned campaigners such as Richie Collins and Phil Thomas, young Martyn soon became a regular choice with his good support skills and foray work from the base of the scrum. 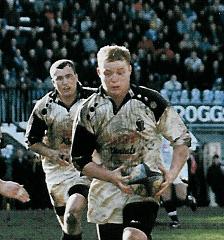 Having gained international honours at all levels through Youth, Schools, Student and under 21 level with Wales, Martyn won his first senior cap as a Ponty player against the Barbarians in 1996.

A move to Cardiff in 1999 was followed by further senior international honours for Wales, whom he captained, and selection for the British & Irish Lions tours of Australia in 2001, New Zealand in 2005 and South Africa in 2009.