Hailing from the Rhondda Valley Lloyd Williams progressed through the junior and youth ranks of his local club Treorchy RFC. He played an integral role in the Rhondda Schools under 15 squad’s domination of the Dewar Shield and was also selected to represent the Boys Clubs of Wales. 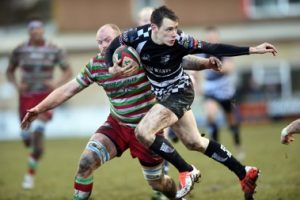 As injuries and regional call ups affected Pontypridd’s selection in the scrum half department, Lloyd was given an opportunity to play on permit during the 2012 – 2013 campaign, making his mark as a dynamic link between forwards and backs.

Lloyd made ten senior appearances in all, including starring roles as a second half replacement in the SWALEC Cup Final and in starting the Premiership Play-Off Final.

Having been a key performer in the club’s double winning exploits, Lloyd made his move to Pontypridd a permanent one in the summer of 2013.

During the ensuing seasons Lloyd found himself vying for the scrum half berth at Pontypridd with his younger brother Tomos who was on allocation from the Blues.

Lloyd went on to make 93 appearances for Pontypridd, scoring 17 tries, before departing the club in the summer of 2016.