Gary Williams represented Pontypridd for over ten seasons as a hard hitting centre or full back.

Already capped by Wales and Great Britain at youth level in the league code, Gary first turned out for Ponty on permit from his local club Aberdare at the end of the 2008-09 season. He soon established himself as a regular in the team, mostly at inside centre, where his abrasive style in defence and attack made him a firm favourite with the Sardis Road crowd. He won his 100th club cap in April 2015 and went on to total 171 senior appearances, scoring 32 tries and 164 points. 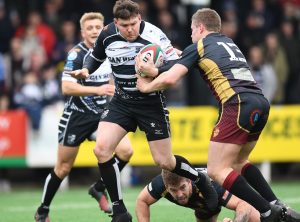 Employed as a coal miner Gary brought his physical prowess on to the field of play without ever holding back, but paid a price with a series of injuries that entailed much time spent on the sidelines. At the end of the 2019-2020 season Gary had to concede to a long standing ankle problem and decided to call time on his playing career.