Damian Welch made his mark as an athletic and industrious lock forward with Cardiff University, where he was a student of law.

Playing in four Welsh Varsity matches against arch rivals Swansea, Damian was a regular performer for Cardiff University and for the Wales Universities team. 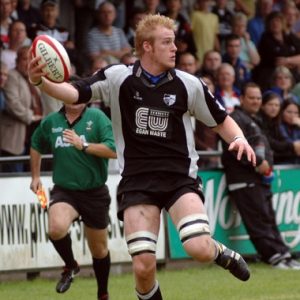 Having graduated from college, Damian was given the opportunity to play for Llantwit Fardre in Division one of the Welsh leagues in 2005, and was duly called up to play on permit for Pontypridd in the Premiership.

A couple of impressive performances as a ball winning line out operator against Llanelli and Cardiff earned Damian the right to return to Sardis Road as a trialist during the summer of 2006, and claiming a place in the Ponty senior squad for the ensuing season.

In the summer of 2007, Damian left Pontypridd to join Cardiff with the intention of impressing the Blues regional selectors.