Pontypridd-born Gerald Watts joined the club at schoolboy level in 1968, and continued through the ranks of youth, athletic and into the first XV. 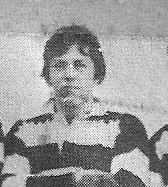 Gerald played eighteen games for Pontypridd at centre, and filled in at fly half for a further two games.