Beddau born and bred, Darren Waters came up through his home town’s club junior and youth system, swapping positions between flanker and scrum half.

Having been capped for East Wales under 11s as a flanker, Waters then played a couple of seasons to youth level as scrum half, before maturing into a fully fledged back rower. 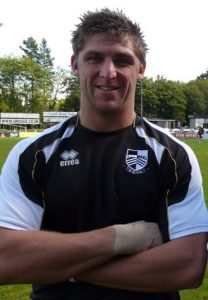 Making an impact as an abrasive and industrious openside flanker, Darren was rewarded with selection for the Blues regional under 25’s team.

As Pontypridd looked to bolster their back row strength during the summer of 2009, Darren came to Sardis Road as a trialist, and was duly signed up to the senior squad.

After two seasons with Pontypridd, and earning the Principality Player of the Month award for January 2011, Darren’s potential was rewarded with the offer of a professional contract from the Gwent Dragons regional outfit.

In 2014 Darren transferred to London Welsh, featuring in the club’s rise to the English Premiership. In the summer of 2016 a move back to his homeland saw Darren rejoin Pontypridd, but confined to a cameo role during pre-season before suffering a serious knee injury.