Hailing from Aberkenfig in West Glamorgan, Lloyd Warner represented Tondu at junior and youth levels before graduating to the Bridgend under 21 team, spending two seasons at the Brewery Field, from 2001 to 2002.

Impressing as a strong running full back, Lloyd was called up for a Wales under 21 trial, and as a result was approached by English division two side Rugby Lions, where he spent the early part of the 2003 season. 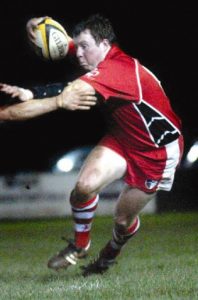 Having been previously mentored by then Ponty coach Justin Burnell whilst at Bridgend, Lloyd answered his call to join up with Pontypridd in the spring of 2003, and immediately made his mark with the senior team as a potent attacker and try scorer, equally adept at full back, centre and wing.

Finding his chances limited in the 2005 squad, Lloyd was released to join premiership rivals Maesteg.