An imposing centre, Lee Thorne was called up by Pontypridd from local club, Llanharan where he was only in his first year of senior rugby at the end of the 2008-2009 season. 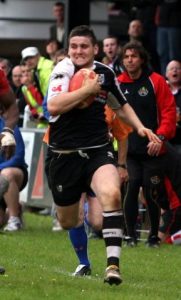 First making his mark playing against Cardiff at the Arms Park, the 19-year-old Lee was duly given a starting place against Cross Keys in the final match of the season, where his telling breaks, man-and-ball tackling, barnstorming runs and eventual try justifiably earned him the Man of the Match award.

Espying a young player brimming with potential, the Ponty management signed Lee in readiness for the 2009-2010 season.

Lee departed Pontypridd during the summer of 2010 for Crosskeys.