Ken Thompson played in the second row for Pontypridd against Australia in 1981.

Ponty at the time controversially dropped Bob Penberthy in favour of Thompson to partner John Luff in the boiler house. 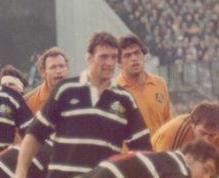 Pontypridd lost by 6 points to 3 although it was the only game on the Australians’ tour in which they did not score a try.

Thompson was studying at Swansea University at the time, and played 22 games for Ponty scoring 1 try.