Although a native of Maerdy in the Rhondda Valley, Matthew Thomas first came to prominence with the Newport under 21 team, gaining international honours with Wales at that level. 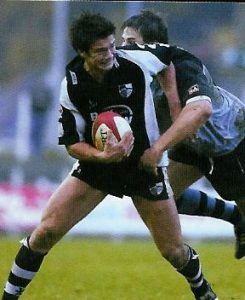 Matthew made the move to Pontypridd for the 2003/2004 season, gaining further honours with Welsh Universities during his time with the club.

The following season Matthew left to play for Caerphilly, before moving on to Newport, Ebbw Vale and Pontypool.