Born in Barry, Lee Thomas played for the town’s junior rugby team before moving on to represent the Llandaff club at the same age level and earning a sports scholarship to the New College.

The next step up was to Cardiff Youth, where Lee emerged as a prolific points scoring outside half. 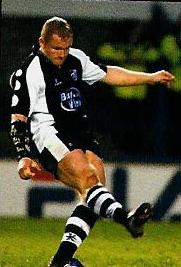 Lee joined the Pontypridd Academy for the 2002 season, undergoing a positional change to inside centre whilst still piling up the points with his long range goal kicking.

International honours followed with the Wales FIRA under 19 team, including a trip to the World Cup in France in the spring of 2003.

Having already made an impressive first team debut against Neath whilst still with the under 21s, Lee became a key member of the Ponty senior squad for the 2003/04 premiership campaign.