Jake Thomas played his junior rugby with his local club Ynysybwl, following in the bootsteps of big brother Adam. He gained representative honours with Wales at youth level and was called up to the Blues regional age grade squads. 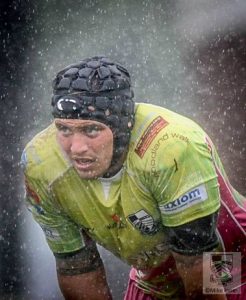 The Blues Academy placed him with Cardiff RFC in 2007, and Jake spent three seasons with the capital club, gaining further international honours with Wales under 20s. In the summer of 2010 Jake ‘came home’, and joined up with Adam at Pontypridd, making his debut against Cross Keys.

Able to play across the back row, Jake soon became a regular name on the Pontypridd team sheet. Unfortunately, serious injuries in 2013 and 2017 restricted his game time. Jake Thomas went on to make 151 appearances for Pontypridd, scoring 31 tries.