Carl Thomas was born in Bedlinog, but made his mark at senior level with Llantwit Fardre in the second division.

When the club’s coach, Justin Burnell moved to Pontypridd in 2003, he took Carl Thomas with him. 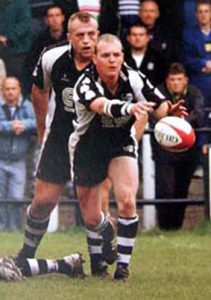 An abrasive scrum half, “Lion” became a stalwart of the Pontypridd premiership team, vying for the no 9 shirt with Paul John and Gareth Jones during his two season stay with the club.

Carl Thomas’ physical approach to the game was underlined by his summer commitments to the Valley Cougars rugby league team.

Having represented both Beddau and Llantwit Fardre in Division One of the SWALEC leagues, Carl returned to Pontypridd during the summer of 2012 for a further one season stint with the club.