Born in Mountain Ash, Karl Swain played for Pontypridd Youth and Schools before graduating to the club’s senior ranks in 1974. 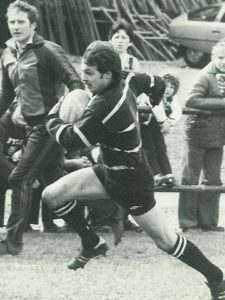 Establishing himself as a devastating poacher of tries on the wing, Karl notched up an amazing tally of 179 touchdowns in his 277 appearances for the club, setting a record of six tries scored in one game in the process.

Following his retirement as a player, Karl went on to coach Cilfynydd.