Hailing from Tondu, Nathan Strong’s first sporting priority as a child was with the game of soccer, but eventually converting to the oval ball code, playing for Beddau under 16s. 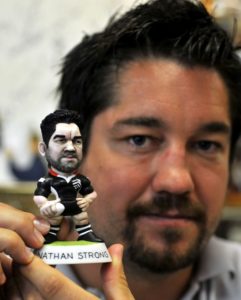 Having played for Bridgend RFC at youth level, Nathan broke into the senior ranks with his local club Tondu in 1996, and went on to captain the side. A brief spell with Caerphilly, where was coaching at the time, precluded a return to Tondu, from where representative honours were won with Glamorgan County.

Making a name for himself in the Premiership as a highly physical back rower, Nathan went on to captain Bridgend, and whilst representing the Blue Bulls rugby league outfit, was capped by Wales at amateur and senior level in the thirteen man code.

In the summer of 2005, Nathan transfered to Pontypridd,  offering the benefit of his experience and physicality to the young Ponty squad.

Making a huge and immediate impact with the Sardis Road side, Nathan produced a series of barnstorming back row performances throughout the 2005 – 2006 campaign, crowned by the honour of lifting the Konica Minolta Welsh Cup as team captain. Having instantly become a great favourite with the Ponty crowd, Nathan was voted Player of the Year 2006 by the Supporter’s Club, a fitting tribute to his immense contribution during the season.

In the 2007 off-season, and following Dale McIntosh’s departure to take up the reigns as Forwards Coach, Nathan was charged with leading the team in the 2007/08 season as Club Captain.

At the end of the 2009/10 season, Nathan decided that the time was right to move closer to home, and departed Sardis Road to subsequently play forBridgend, Maesteg, Aberavon and Tondu.