Having joined Pontypridd from Newbridge, Jason Strange’s stay at Sardis Road was hampered by a long running contractual dispute which prevented him from playing any competitive league or cup games for the club. 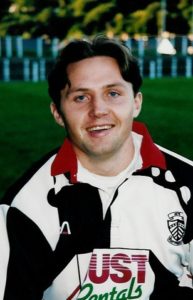 A proven performer at international level with Wales A, his Pontpridd career was confined to only two appearances, one against the national USA Eagles touring team.

Jason went on to play for Llanelli, Ebbw Vale, Newport, Rotherham, Bristol and Leeds Carnegie, and then to a coaching role with Wales under 20s.