Hailing from Trealaw in the Rhondda Valley, Morgan Stoddart represented Treorchy through Junior and youth levels, and graduated to the club’s senior ranks in 2003, still only eighteen years of age. 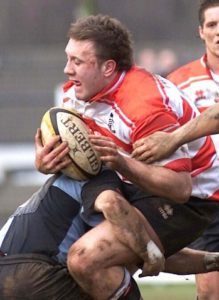 Having gained representative honours for the Mid Districts, Morgan was invited on trial for Pontypridd, and selected for their senior squad for the 2004/2005 season, a valuable acquisition for the Sardis Road club in being able to cover the full back, centre and outside half positions.

Making the most of his opportunities, Morgan made a big impact during his first season in the premiership, gaining a reputation as an explosive attacking full back, and becoming a trialist with the Wales under 21 squad.

Making his mark for Ponty during the 2005/06 season, Morgan was a catalyst for some of the best attacking back play seen at Sardis Road for many a season, and was instrumental in the 2006 Konica Minolta Cup final victory over Neath, his charges upfield providing valuable possession to his teamates.

As a consequence of such widespread acclaim, Morgan was headhunted by the Scarlets, and departed Pontypridd in the summer of 2006 to take up a professional playing contract with the West Wales region.

Morgan went on to be capped by Wales, scoring a try on his debut for his country.