Mark Spiller began his rugby career with his local side, Nelson, before switching to Ebbw Vale in the first division. Following a spell with Pontypool, where he impressed as a hard grafting blindside flanker, Mark joined Pontypridd in 1993. 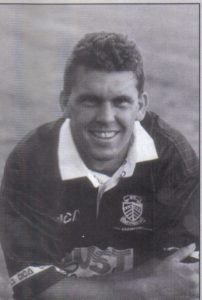 He featured against the South African and Fijian national touring teams in 1994 and 1995 respectively, and won international honours with Wales A.

Throughout the 1990s Ponty were well blessed with back row talent, Mark Spiller and Matthew Lloyd both vying for the no 6 shirt, and both quality performers.

Mark, a roofer by trade, returned for a spell with Ebbw Vale before going back to his roots as coach with Nelson RFC.