William John “Billy” Spiller (8 July 1886 – 9 June 1970), was a Welsh rugby union player and cricketer. His greatest achievements were in rugby, where he won ten international caps at centre for Wales between 1910 and 1913, but his short first-class cricket career was also notable as he was the first man to score a century for Glamorgan after their elevation to first-class status in the 1921 season. 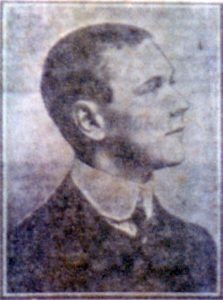 Spiller was born in St Fagans, near Cardiff, and played minor cricket for Glamorgan from 1905 onwards, although as a police officer with the Glamorgan force he was unable to appear regularly for the club after 1908. He did, however, achieve much success in club cricket in the area, while in rugby he was part of the Wales team that in 1910-11 won the Triple Crown, a feat they were not to achieve again for almost four decades. He scored a fine try on his Welsh debut against Scotland in 1910. In club rugby he played 184 games for Cardiff between 1905 and 1914 and also played for Pontypridd.

Spiller made his first-class cricket debut for Glamorgan in July 1921 against Worcestershire at Kidderminster, having gained two months’ leave from his police job, and made respectable scores of 40 and 23.

Spiller died in the village of his birth a month short of his 84th birthday.