Having come up through the ranks with his home town club of Merthyr and gaining recognition with Welsh Youth on the way, Robert Sidoli broke into the Ironmen’s first team at the tender age of nineteen in the 1997 season.

Some impressive displays in the first division led to an invitation to appear on permit for Pontypridd in the play off stages of the 1998 campaign and a permanent move to Sardis Road the following summer. 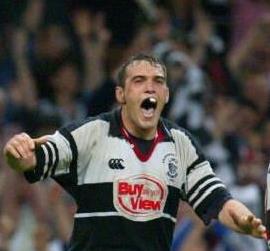 A prominent target in the line out and showing an appetite for the the ball in open play, Robert epitomised the modern front five forward and was rewarded with international honours for Wales at senior level.

With the advent of regional rugby, Robert went on to play for the Celtic Warriors, Cardiff Blues and the Dragons.

The prodigal son made a return to Sardis Road at the end of the 2014 – 2015 season, taking up the post of assistant forwards coach vacated by Geraint Lewis which he held until his departure in the summer of 2017.