A product of the Pontypridd Schoolboy and Youth system, Richard Sheppeard made his debut for Pontypridd in March 1988 against Glamorgan Wanderers. Between 1988 and 1994, Richard played in total 68 times for the club, scoring 20 tries.

Richard had an extremely successful schoolboy rugby career, having been capped at Welsh schools under 15s, under 18s, under 21s, Welsh Universities and Crawshays. 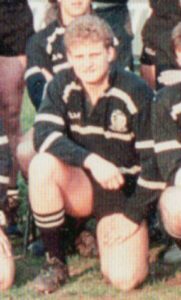 Richard’s last game for the club was against Mountain Ash in March 1994. He went on to play for UWIC, where he captained the team.

After qualifying from UWIC, Richard played for Treorchy, Caerphilly and Merthyr, before a back injury ended his playing career.

Following this, Richard went into coaching, firstly at Merthyr, then at Llantwit Fardre alongside Justin Burnell, before moving on to Cilfynydd.

Richard has also coached Cynon Valley schools, where he oversaw the development of future Pontypridd players.