Jim Scarlett played his first game for Pontypridd on 26th January 1988, but only played two games that season. However, he joined the club from Beddau the following season, and immediately made his mark as a mobile and aggressive lock. 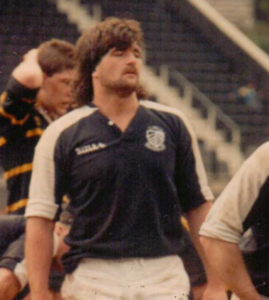 He became one of the first names on the team sheet for the next two seasons, and a great favourite with the ‘bob bank’.

His beard, flowing hair and socks around his ankles a la Français made Jim instantly recognisable every time he took the field. Unfortunately his aggression and high visibility often brought him to the attention of Welsh referees.

The style of play favoured by the coaches at the time also meant that the club came under close scrutiny, and Big Jim was an easy target for officials.

After a stint with Llanelli RFC Jim returned to Ponty in 1992 but only for a brief while before retiring from the game.