Mark Rowley – ironically known as “Tiny” – was a towering presence in Pontypridd’s forward unit during their golden era of the mid nineties.

Mark made his senior debut for Ponty in 1984 but then departed for a spell with Cardiff RFC. 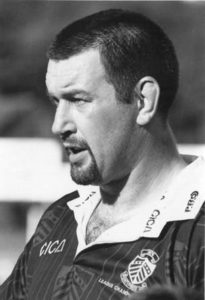 He returned to Sardis Road in 1991, forming a formidable lock partnership with Greg Prosser, his ball winning capabilities in the middle of the line out setting the platform for Ponty’s success.

Following his departure form Sardis Road, Mark went on to represent a number of junior clubs, Abercynon, Penygraig and Dinas Powys amongst them, and ventured into coaching with the Caerphilly Academy and the Valley Cougars rugby league outfit.

Mark was employed as a South Wales Electricity linesman, before opening his own sports retail outlet – “2 Tall” – in Abercynon.