Dai ‘Gus’ Rogers progressed to the Pontypridd senior team in 1949 having previously played for the club’s Athletic XV. 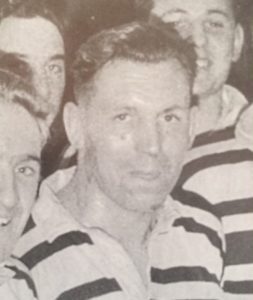 A sturdy prop forward he went on to have a long career with Ponty spanning over ten years, totalling 241 appearances during which he scored 12 tries.

A stalwart club servant, after retiring Rogers went on to serve as a Pontypridd RFC committeman.