Having been capped for the Welsh Secondary Schools team, whom he captained, Russell Robins established himself as a skillful and creative no 8 in the Pontypridd senior team.

Bucking the trend of having to move to other, more fashionable clubs to gain international honours, Russell won his first of thirteen Welsh cap against Scotland in 1953, proudly doing so as a Ponty player. 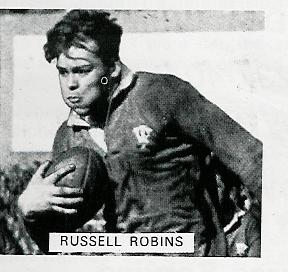 The pinnacle of his illustrious career came on the Lions tour to South Africa in 1955, where Russell’s creative skills came to the fore on the hard grounds, helping the Lions to draw the series with the Springboks.

It was there that he gained a reputation in many people’s eyes as the finest exponent of back row play in the world.

Russell Robins remained loyal to his local club of Pontypridd, captaining them for three seasons, before taking up rugby league with a move to Leeds in 1959.