Rhondda born and bred, Scott was raised in the village of Williamstown, and played his junior rugby for Gilfach Goch. Drafted into the Pontypridd under 17 and Academy squads, Scott’s huge potential as a hard scrummaging and mobile prop forward led to international honours with Wales at youth level. 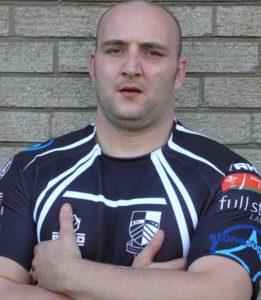 A successful stint with the Pontypridd under 21 team led to a regional call up with the Celtic Warriors, and a summer tour of South Africa with the Young Warriors in 2004. Having already figured with the Ponty senior squad in the premier division,Scott then transfered to Bridgend, and there made a switch from tight head to loose head prop, with great success.

Scott became an integral member of the grand slam winning Wales under 21 team in 2005, and then toured to Argentina for the under 21 World Cup. Having been signed up as a professional with the Blues regional academy, Scott returned to Pontypridd to bolster the premiership squad at the commencement of the 2005 / 2006 campaign.

Having spent the summer of 2006 playing club rugby out in Australia, Scott returned to gain a full time senior regional development contract with the Blues, with an allocation to Cardiff RFC.

A move followed to the Scarlets region, and following a brief spell with Coventry RFC in the English Championship to the Gwent Dragons region, who gave Scott a placement with Bedwas RFC.

In the summer of 2012 Scott’s rugby career turned full circle with a welcome return to his club of origin, Pontypridd RFC.

An ankle injury incurred during the pre-season of 2013 saw Scott sidelined for the commencement of the ensuing campaign, followed by a decision to retire from senior rugby due to work and family commitments.