Hailing from the Graig area of Pontypridd, Thomas Riley played for Beddau juniors and youth team, and was educated at Hawthorn Comprehensive School.

Joining up with the Pontypridd Academy, to play at U19 level in 2002, Tom was selected for Wales Youth U18s and played a pivotal role in an unbeaten season in the Six Nations and European Four Nations tournaments. 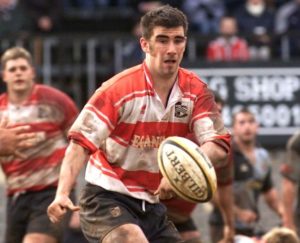 Called up to the senior Pontypridd squad for the 2003/04 season, Tom impressed with a series of outstanding performances in the premiership, his gliding midfield breaks from outside centre becoming a trademark of his play.

Further international honours followed, representing the Wales FIRA U19 team in the Six Nations Championship and 2004 World Cup out in South Africa. Establishing himself as a mainstay of the midfield unit for Pontypridd, Tom went on to gain international honours with Wales under 21s, helping the team to their Grand Slam achievement in 2005, and was rewarded with a full time regional contract with the Blues Academy.

Continuing to impress with a series of highly influential midfield performances for Ponty, Tom became a regular with the Wales under 21 team, and was given a senior regional debut by the Blues in 2006.

Having completed his time as a student of Sports Management Studies at the University of Glamorgan, Tom went on to gain a full time senior development contract with the Blues, whilst still linked to Pontypridd RFC. Released by the Blues in 2008, Tom joined Newport RFC before moving on to the Cornish Pirates.