A powerful master of the front of the lineout, Greg Prosser was the son of Ieuan Prosser, the former Aberavon and Glamorgan Police player. His brother Stuart also played a few games for Pontypridd in the 85-86 season. 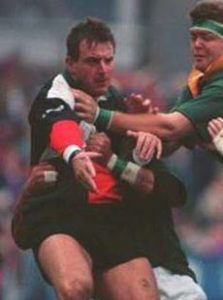 Greg won four Wales Youth caps as a South Wales Police cadet in 1984 and 1985 from the number eight position and was the team’s goal-kicker. He played for South Wales Police for many years and first turned out for Pontypridd in 86-87 season.

He then left for Bridgend before rejoining Ponty in 1994, playing an integral role in the club’s huge run of success.

Greg appeared for Pontypridd against South Africa in 1994 and Fiji in 1995.  He made his full international debut against New Zealand in the World Cup of 1995, and toured South Africa with Wales in the same year.

He won Barbarian honours, and Wales A caps against Canada A, France A, Ireland A and Fiji.

A police officer with the South Wales force, Greg went on to play for Llantwit Fardre following his departure form Sardis Road.