Originally from Brecon in mid Wales, Ian Poley came up through the ranks playing for Brecon Comprehensive School and Brecon Youth, whilst also serving time with Neath Athletic Juniors. Having won international honours with Wales at youth level, Ian then moved on to study Sports Science at UWIC and represented the college team from 1996 to 2000, winning further international caps at under 21 level. 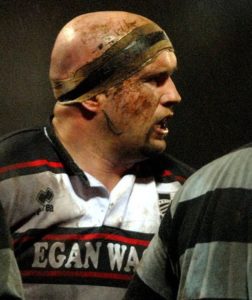 A serious knee injury impeded Ian’s rugby career, before he joined up with Tondu RFC to complete his rehabilitation and to re-establish himself at club level as a solid scrummaging tight head prop. Employed as a PE teacher at Pencoed Comprehensive, alongside Ponty senior coach , Ian was invited by to join up with the Sardis Road outfit during the summer of 2005, to bolster the club’s front row options in their quest for premiership honours.